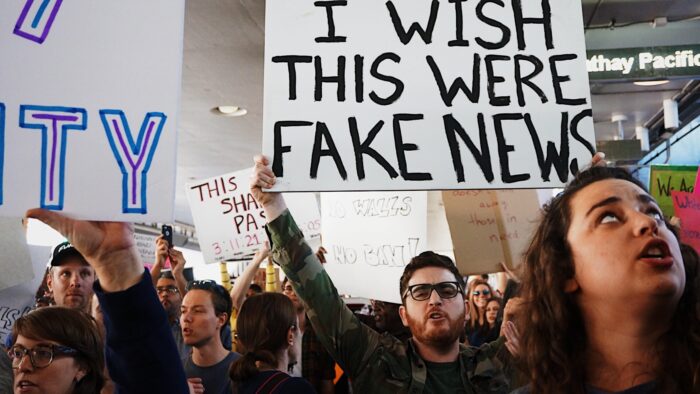 Although our knowledge of the universe is steadily increasing thanks to the sciences and humanities, verifiable facts, such as the fact that the earth is round, are again increasingly becoming points of contention. It is therefore time to recapitulate: How are facts to be distinguished from opinions and why is research the best means of discerning facts?

In recent years, events mainly outside the scientific disciplines have led to the re-creation of large-scale authentication of false claims, even in the Western world. For example, the audience size of the inauguration speech of the 45th president of the USA was not the largest ever witnessed, which is clearly proven by raw image data [1]. Nevertheless, contrary to this clear evidence, the opposite was claimed with utmost conviction and falsely sold as fact. In such a post-factual political style, «alternative facts» are spread in order to weaken the confidence in the indisputability of facts and to present them as mere opinions.

Even knowledge that was commonly regarded as fact and would probably not have provoked widespread opposition a few years ago, is suddenly doubted again. An example of this is the community, which has been growing rapidly in recent years, that once again holds the ancient 'opinion' that the earth is flat [2]. Aptly, journalist and author Sascha Lobo wrote in 2012 (translated from German), «Everyone has the right to their own opinion, but no one has the right to their own facts» [3]. Subjective opinions can never be clearly classified as right or wrong, because they are not verifiable. The question of whether pineapple slices belong on a pizza cannot be conclusively settled. The situation is different with facts, which, in contrast to an opinion, are verifiable. That the earth is round is a verifiable fact [4] - independent of a personal opinion.

These verifiable facts, or in short: creating knowledge, is the core business of the sciences. Even though they are not alone in the pursuit of knowledge, as both journalists and detectives are also engaged in fact-finding, the methodological sciences are characterized by the universal applicability and reliability of their results. Therefore, there is actually a broad consensus that data, which were collected with the help of validated scientific measuring methods, are already to be equated with facts and can create new knowledge.

The sciences make this claim to facts (not to opinions!) because they provide the corresponding evidence, i.e. data. However, the difference is not found in the mere existence of a data situation itself, but in its systematic collection and interpretation. Of course, other disciplines also use empirical data; however, unsystematic analyses of this evidence can lead to fallacies.

For example, an individual journalistic report may well be considered as evidence, but this case report (so-called anecdotal evidence) alone is usually not sufficient to make generally applicable statements.

Keywords in this context are 'correlation' and 'causality'. A causal relationship (causality) of two correlating phenomena can usually not be distinguished from a merely common occurrence (correlation) without experiments with strict adherence to scientific standards. An example: the inhabitants of the 'New Hebrides' islands used to be convinced that lice were beneficial to health, as they were rarely sighted on sick people (negative correlation). However, the real reason is that lice are extremely sensitive to body temperatures. The fever of patients caused the lice to look for another host (causality) [5]. This question could be clarified systematically only with the use of a medical thermometer and temperature experiments with lice for instance.

Creating a reliable data basis is costly: Data must be collected systematically using precise measuring instruments and experiments. In addition, experimental controls must be carried out and taken into account. Researchers can thus minimize the influence of human fallibility and intuition and recognize facts more clearly. Results of research are thus to a certain extent self-controlled by scientific methods and are therefore not based on pure trust in the results.

Provisionality as a principle of science

Thanks to reliable data, «alternative facts» are the least of the problem in classifying facts. Even if post-factual discourses and the increased dissemination of «alternative facts» make dealing with statements more laborious than necessary, such false statements can often be quickly refuted with appropriate evidence. It is more difficult, however, when statements believed to be true turn out to be false.

Especially in the sciences this is continuously the case. Scientific findings are continuously improved and adapted to the latest state of knowledge. However, this does not change the claim of research to want to establish facts. Scientific revisions are characterized by the fact that what was previously mistakenly believed to be true turns out to be false, and not that what was true became false. The evidence situation and thus the factual assumption have changed, but the fact itself has not. Thus, with responsible research, there is no deliberate deception at any point - as is often the case with the dissemination of «alternative facts».

Unfortunately, it is precisely this provisional nature of scientific theories that is often used as an argument to be generally suspicious of findings in the field of research, and in some cases to portray them as mere opinion. However, it is precisely the constant verification and improvement of theories that is necessary in order to ever be able to establish facts.

Of course, also scientists can be wrong. A single study in the vast space of complex issues can lead to misinterpretation, even by experts. Furthermore, the current increased incidence of inappropriate experimental designs leads to a 'reproducibility crisis' in science. Especially in the life sciences these inadequate experiments lead to bias and thus falsification of results. Even if there is often no malicious intent behind these non-reproducible data, research not only harms itself but also puts the public trust placed in it at risk. The scientific community is, however, not sitting idly by and is working to address the problems identified, for example by developing new guidelines and establishing oversight organizations [6].

But let us leave behind the rare cases of inadequately conducted science and turn to the 'normal' scientific revisions. That is, those that are accomplished not because of errors, but by expanding our horizons of knowledge. In this process the earlier hypotheses are falsified on the basis of new knowledge and complemented or replaced with better ones - a process necessary for the progress of science. If a conception of the world even changes fundamentally, one speaks in certain science-theoretical views of a so-called paradigm shift [7].

The Copernican Revolution provides an impressive example here. During the 16th and 17th centuries, Copernicus succeeded in revolutionizing a world view that was almost a millennium and a half old. His observations herald a new era in astronomy and fundamentally changed philosophical views regarding man's place in the universe [8]. At the same time, the geocentric worldview was no longer considered sufficient to explain the motion of celestial bodies and everything that depends on it.

In other words, during a certain paradigm epoch, it is not even possible to formulate statements outside of just this paradigm, before it is not replaced in the context of a paradigm shift. To illustrate: Before the discovery of atoms and molecular compounds, it was not possible to define water as H2O.

The state of science at that time only allowed descriptions of water as a «transparent liquid that reaches its highest density at 4°C». Only the possibility of chemical analysis and the paradigm shift that accompanied it allowed the much more precise definition of water that is common today: two hydrogen atoms attached to one oxygen atom, i.e. H2O.

The knowledge gained during the previous paradigm does not automatically have to be discarded as a result. The transparent liquid known as water does indeed have its highest density at 4°C. However, the theoretical framework with which one can make statements about substances was rebuilt with the beginning of molecular-chemical analyses. Newtonian mechanics, which was the basic paradigm for physics for more than 200 years, was also extended by Einstein's theory of relativity. Nevertheless, it still fits the vast majority of available data and remains very useful as a model.

The crucial question now is: Is there such a thing as incontrovertible facts at all and can we ever recognize them despite the continuously occurring scientific revolutions?

Between reality and truth

In the modern sciences, the principle of fallibilism generally applies: hypotheses can only be falsified, but never verified [9]. That means, scientific theories cannot be confirmed and accordingly be regarded as absolutely certain. Whether by this constant improvement and refutation of hypotheses the «truth» can ever be found is one of the most fundamental questions of the philosophy of science. At the same time, this raises the question: is there an objective 'reality' at all? According to the 'radical constructivism', reality is a mere construction of our brain [10]. This would also mean that all facts are mere constructions and do not exist objectively. In contrast to this the 'naive realism' states that all things are essentially exactly as they appear to us [11].

The 'truth' lies somewhere in between presumably. Completely without the processing performance of our brain we would only register information with our optical sense like digital cameras. In any case, we would all be different camera models, because, for example, color blind people see a colored object measurably different than people with the ability to perceive colors. In addition, the processing activity of the mind can be different for different people and thus generate different results. An example of this is the internet sensation from 2015, where a piece of clothing is perceived as either blue/black or white/gold depending on the viewer and their individual color perception [12]. Therefore, under certain circumstances, it is possible that different people generate different factual assumptions based on their individual processing of information.

Nevertheless, in my opinion, the existence of individual perception and interpretation is also not sufficient to deny the existence of an observation-independent reality. The individual perception of the color spectrum, does not detract from the existence of light waves. These can be identified also by procedures and measuring instruments, which have no mind or processing part after all. Also the question about the actual color of the dress could be answered conclusively by the manufacturer: namely black/blue [13].

Finally I am of the opinion that neither the fallibility of the scientific search for knowledge, nor the processing part of the human conception imply that research would not be able to recognize facts. We should again begin to recognize that scientific factual assumptions are generally trustworthy because they are empirically supported and are continually tested and adjusted where necessary.

It is important, however, that we again make a stronger distinction between lies and false assumptions. Properly conducted science does not lie. It can only be based on false assumptions, which are necessary for scientific progress, but can and should be improved. Even if scientific theories are therefore often valid only in their paradigm epochs, they are meanwhile the best means we have to understand the world.

Therefore, scientific statements about the environment are to be valued as facts, even if the theoretical framework on which the statements are based could change again in the future. Just because Einstein's theory describes the universe better, Newton's theory did not suddenly become wrong and we could fly to the moon with it admirably. The fact that we are uncertain how final momentary theories are, does not automatically mean the absence of any certainty. Yes, there are facts without alternatives in this world and science is the most reliable way to establish them.

For example, a list for review can be found here: https://www.popsci.com/10-ways-you-can-prove-earth-is-round/.

How to Lie With Statistics, by Darrell Huff