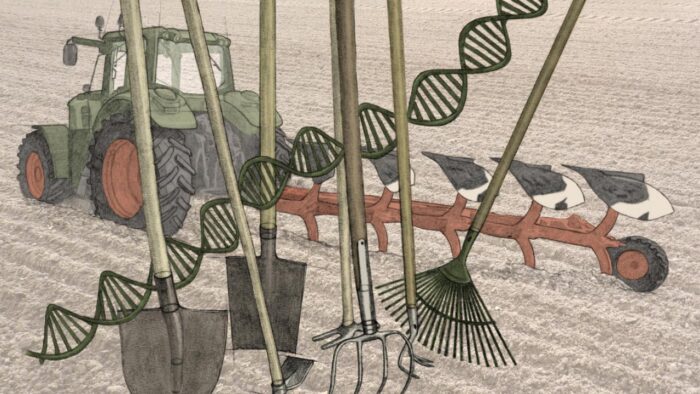 Genetically modified organisms have been in the public debate since the 90s. Public health, food and environmental safety are at stake. While new gene technologies are rushing through, we need to launch discussions on their regulation to be able to profit from the benefits and minimize risks.

Genome editing aims at modifying particular nucleotides in the sequences of an organism. In a similar way as we can copy, paste or cut words in a text editor, particular enzymes can be used to remove, add a DNA sequence, or correct a single letter. New techniques of gene editing allow to perform these modifications in a more precise, and efficient way leading to a wide range of applications far beyond research labs, that will affect us all, our health, our nutrition, our environment. This new technology raises hopes to create drought and parasite resistant crops limiting the use of pesticides. Genetic modification can be targeted to produce higher yields and improve food and nutrition in face of a growing population and climate/environmental changes.

Sounds great, doesn't it? But using this targeted evolution is not without risks1. One needs to check for a potential toxicity for humans. The genetic modification generates a new protein in the organism that our body has never previously encountered. It is possible that our immune system reacts against it and that we develop allergies. Moreover, the new gene could migrate to regular or wild crops putting biodiversity and ecosystems at risk. Lastly, there is a danger that the modified gene gets transferred to some cells of our body or to intestinal bacteria. Antibacterial genes have been often inserted in traditional genetically modified organisms (GMOs), a gene transfer to intestinal bacteria could generate resistances to antibiotics. The gene edited crops are still very recent, more research is needed to fully evaluate the extent of the risks yet.

To limit risks, avoid abuses and misuses, GMOs and genome editing crops needs to be tightly regulated. How Switzerland and the European Union regulate GMOs to cope with the risks? What about gene edited crops? Are they considered GMOs, or do regulations need to be updated to account for this new technology? Scientific academies give their recommendations 2,3. Let's have a closer look.

GMO regulation in Switzerland: standstill since 2005.

Switzerland unlike other countries such as USA and Canada has adopted a sceptical position as regards GMOs. In face of potential dangers for human and animal health as well as for environmental preservation, Swiss legislators have opted for the precautionary principle. Consumption of GMO food is allowed after an thorough evaluation procedure. In contrast, before allowing the culture of GM crops on Swiss land, legislators are waiting until the protection of human beings, animals and the environment is demonstrated and that evidence of the benefits of the applications of gene manipulations for the welfare of human beings, animals and the environment are provided (Gene Technology act 20044). Therefore a moratorium on the culture of GM crops has been put in place since 2005 after the success of the referendum about the initiative “For GMO free products from the agriculture”. Since then, the moratorium has been extended several times from 2010 to 2013, then to 2017 and recently until 20215.

This freeze of GMO culture in Switzerland aims at allowing time for more research on the biosafety, scientific and socio-economic consequences of GMOs. The Swiss government funded a national research program (PNR59) which ran 30 research projects from 2005 to 2011. Despite the absence of evidence for toxicity in humans and animals as well as for the environment, and despite proofs for economic and environmental benefits to the Swiss agriculture3, production of GMO food for human and animal consumption remains forbidden in Switzerland. One major issue in a small country like Switzerland is the coexistence of both GMO and non GMO crops while ensuring no contaminations and maintaining the biodiversit6.

To date, very few GMO derived products (1 soya strain, 3 maize strains) are on the market in Switzerland7 after thorough examination for health and environmental risks by the Federal Food Safety and Veterinary Office (FSVO). Authorized GMOs are used mainly in production of vitamins (2), rennets (2) or other nutrition complements (2). Following the desire of Swiss people to be able to choose between genetically modified (GM) and non GM products, products containing more than 0.9% of GMO have to be labelled as containing GMOs.

Given the small size of Switzerland, and the small area dedicated to agriculture, high yields are very important to avoid relying too much on food/feed importations. In 2015, food imports constituted 72% of Swiss consumed food coming mainly from the European Union (source Swiss-Impex8). Following the preference of Swiss consumers for a gene technique-free agriculture, GM-free food or the use of GM-free feed for livestock in Switzerland leads to higher prices. Indeed, gene-technology free crops are getting scarce which increases prices. According to the Swiss Bauernverband, the use of GMO-free soya for feeding Swiss livestock costs around 35 million CHF extra every year.

Such a model might not remain sustainable if the European Union and other main country-producers decide widely in favour of GM cultures. Moreover, agreements with the European Union and in the frame of the World Trade Organisation might limit national policies as regards GMOs. Switzerland will have to deal with the globalization of the market (Codex alimentarius9), and needs to follow closely new developments of European policy.

GMO policy: how does it work in the European Union?

The regulation of GMOs at the European level is also heavily influenced by the precautionary principle. It ensures protection of humans, animals and the environment. A unified European regulation guaranties a harmonized procedure for authorization and traceability. A clear labelling is required to allow an informed choice for consumers. Food products in the European Union are not regulated in the same way if they come from traditional agro-engineering or whether they are generated through genetic modifications with presence of genetic modification in the final product. This procedure results in a 'process oriented' regulation10. On the contrary, a 'product based' regulation focuses on the consequences of the genetic alteration and on the properties of the product irrespective of the process to generate. Such a 'product based' regulation is in place in the USA and in Canada (for more details see11).

Legislations in Switzerland and in the EU are similar except that GM crops can be authorized for culture in the EU. GMOs can be imported and cultivated in the EU if they pass the authorization process, after submission to the European Food Safety Authority (EFSA12). EFSA checks on the presence of toxins, the nutritional composition of the plant, the toxicity to animals/humans, a potential allergernicity, as well as possible deleterious effects to the environment before and after authorization.

The authorization process is very stringent, needs to be renewed every ten years and quite non-functional leading to few crops being accepted. Moreover, Europe has two different standards for authorizing whether the crop can be imported for consumption purposes13 or whether it can be cultivated on EU soil14. This makes it easier to use imported modified feed for livestock. 58 species are authorized for feed and food (as of July 1, 2017), only one type of maize can be cultivated (Monsanto's maize variety MON 810 resistant to Leptidotera15). According to the European Commission 60% of EU feed is imported from countries where 90% crops are GMOs16. However, GMOs for food are much less imported and commercialized.

Genetically modified organisms are defined so far as “organisms in which the genetic material has been altered in a way that does not occur under natural conditions by crossing or natural recombination”4,13,14. The new products generated with the latest gene editing techniques, however, do not contain any exogenous genetic material and might have resulted from natural processes. It is thus under intense discussions whether these genetically edited crops fall under the same legislation applicable to GMOs or whether a dedicated framework should be developed.

An interdisciplinary panel of experts composed of ethicists and biologists has been commissioned by the independent European Academies Sciences Advice Council (EASAC from which Switzerland is a member) to evaluate risks and benefits from gene editing. The goal is to raise awareness for scientific opportunities and public interest, as well as to provide recommendations for legislators2. EASAC experts call for more basic research in gene editing to fill the remaining knowledge gaps. Given the potential natural occurrence of these modifications, scientists advocate that the product of gene editing should not be considered as GMOs. Therefore, gene edited crops should, in their opinion, not fall under the current regulation specific to this type of organisms. The report stresses that instead of regulating the Gene Editing technology as it is the case for GMOs, the edited organism should be regulated 'product based' relying on scientific evidence of the balance risks/benefits specific to each new trait. Transparency both on the protocol used and the edited organism is crucial. Experts call for open-science and the creation of a database referencing each modification and their necessary quality controls in order to ensure benefit-sharing and fair competition, as well as the possibility to apply it worldwide to avoid the creation of further inequalities.

What needs to be done?

We need to act quickly, the technology is here and the first edited crops are ready for field trials. However, the European Commission is not expected to legislate on this politically sensitive issue before 201817. In Switzerland we should use the time until the end of the moratorium in 2021 to push rapid discussions before the parliamentary debates arrive.

Despite ample scientific evidence that GM products are not more or less safe than conventional crops, one major challenge remains public acceptance18. Europeans are very attached to their traditional culture of eating. Scientists need to engage in a dialogue with the public and legislators, listen to their worries and be completely transparent about the new food products. On the other side, a continuous research and monitoring of the potential risks of these new products should continue intensely. In this way, consumers could develop trust for these new products, and society could benefit from these promised benefits.

Thank you to Reatch to host my blog post, to Servan Grüninger and Olivia Meier for valuable feedback on the draft as well as to the Food, Agriculture and Green Gene technology group of Reatch for great input.

Marion Betizeau (30) studied biology in France at the Ecole Normale Superieure of Lyon where she also performed her PhD in developmental Neuroscience. She came to Switzerland for her Post-Doc to combine biology with mathematical modelling and computer simulation at the ETH/ University of Zurich. Besides her own research, she is very interested in technology assessment and the link between science, policy and society.