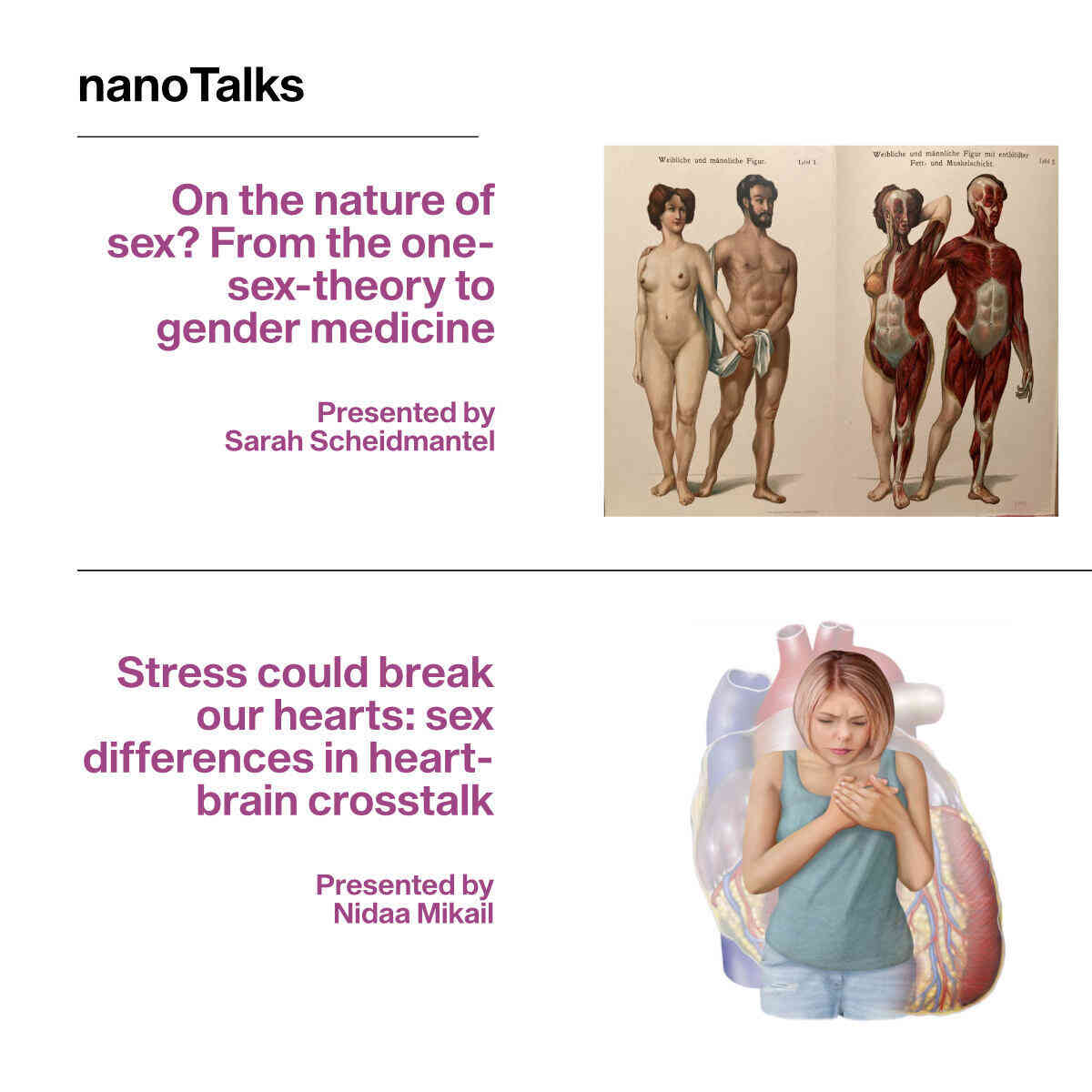 The January nanoTalks will take us on a journey into the exciting research field of gender medicine. Have you ever wondered how stress could break our hearts? Let's learn more about the biology of sex differences in heart diseases. Furthermore, we will get to know why a standard male body is problematic and how nowadays a bi-gender-concept must no longer suffice when we talk about gender medicine.

Talk 1: On the nature of sex? From the one-sex-theory to gender medicine

Presented by Sarah Scheidmantel, Department of Medicine, University of Zurich

The idea that medicine has always been a neutral and fact-based science is historically false. There have always been blind spots, which was manifested in an ideal medical body that was operated on, researched, and practised on. This ideal body was male, as were the personnel who operated on it. Women and their bodies first did not show up at all, later on they were othered. This approach shaped not only the body itself, but also societal ideas and ideal concepts of the body, which resulted in a binary sex/gender relationship that was expressed in both gendered behaviour and diseases. Who doesn't know them, the emotionally strong man and the hysterical woman? This talk will name historically why a standard male body is problematic and why nowadays a bi-gender-concept must no longer suffice when we talk about gender medicine.

Death from cardiovascular origin in women currently exceeds the one in men. Most intriguingly, recent studies report a significant increase of heart attacks in young women <55 years, and in pregnant women. Despite these alarming tendencies, evidence to date has failed to adequately explore female-specific determinants of cardiovascular disease. Sex-differences in heart diseases have a biological basis, which pertains to sex hormones, inflammation, and the neurological systems. Women have also been shown to perceive greater stress after heart attacks, and to have worse outcomes than men do. Interestingly, a link has been demonstrated between a brain region involved in stress and emotions, and long-term cardiovascular events (such as heart attacks, stroke, and heart failure), highlighting the key role of the brain in the development of heart diseases. Compared to men, women may experience disproportionate brain reaction in response to mental stress, which could affect more markedly their heart than in men. Hence, our study aims to determine the influence of sex on the brain and heart activity in healthy individuals subjected to acute mental stress. This talk will summarize the current knowledge about the biology of sex-differences in heart diseases, and give an overview of the study we are currently conducting.